‘Flowing Fades’, the second Saccades album from The KVB’s Nicholas Wood, is due for release April 9th on Fuzz Club Records. Where Wood’s work in The KVB (Invada Records) trades in minimalist post-punk/coldwave, the Manchester-based artist’s solo material under the Saccades moniker is an exercise in escapist psychedelic pop. On ‘Flowing Fades’ we find a world of blissed-out synths, languid carefree guitars, dreamy vocals and influences that range from J.G. Ballard and Serge Gainsburg to 80s dream pop and yacht-rock.

“I began to properly work on this album after returning from The KVB’s North American Tour in late 2019, my head filled with new inspiration for this project and a clear idea on how this album should sound”, Wood remembers: “I wanted to create something soothing and immersive. Music for escapism, which can be listened to at sunrise or sunset. Even though it’s lighter and mellower than my usual output, I feel like there are strong hints of melancholia in there too, reflecting the world in which it was created.”

With the bulk of the album written whilst Wood was cooped up in his apartment over lockdown the album inevitably reflects the social unrest that was unfolding outside. The breezy ‘Like Everyday’ is about “the idea of someone living their life through watching another person’s facade of luxury”. Reading stories of people spying on their neighbours during lockdown, Wood imagined this all taking place in a “Ballard-esque world of paranoia, isolation and opulent high-rises set against a fizzy synth-pop soundtrack”. The hazy four-to-the-floor euphoria of ‘Breezy’ is a song “about the feeling of being carefree and enjoying the moment, even if it’s only for a few seconds, while the world around you falls apart”.

‘Flowing Fades’ is unlike anything Nicholas Wood has made before. The gloomy atmospherics and glacial walls-of-sound seen with The KVB are nowhere to be found and the stripped-back, guitar-focussed psych-pop of his debut Saccades album has taken on a whole now life – one in which the synths take centre-stage again. It’s a rare sort of album that manages to feel purely escapist but has one foot firmly placed in our ever-changing present – Wood using the strangeness of our times as a conceptual launchpad more than anything else. The album is due for release April 9th 2021 on London-based label Fuzz Club Records. 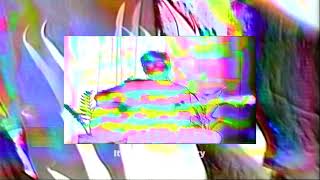